On behalf of myself, Meet Chairman Mike Petronella, Registrar Diana Hood, Assistant Registrar Debbie Geiser, the York Meet Team and members of the Eastern Division Board of Directors, we are excited to invite you to the October 20, 21, 22, 2022 York Meet! Read more

Online Registration for the October 2022 Meet begins July 1, 2022. If you are as enthusiastic about toy trains as we are, come see what we are all about. Once there, join the Train Collectors Association so you don't miss a single show. The October 2022 Meet Notices will be mailed after June 15, 2022 and includes all details plus the member, dealer and guest registration forms. To download a copy - https://www.easterntca.com/reg_home.htm

Check the TCA National Headquarters Newsletter for information on the upcoming 2022 National Convention being held in Nashville, Tenn., June 25 - July 2, 2022.

The best description from the first time attendee is: "I never dreamed I would ever see so many trains in one place". 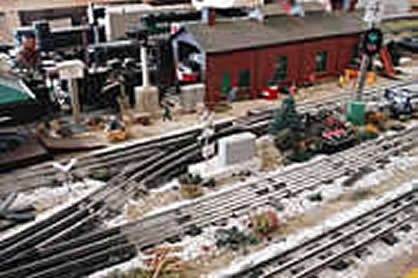 The York Train Meet began in 1969 and has been growing ever since in popularity. I remember the stories the "old" members shared about the early days of York and the only hall open was the Blue Hall. Everyone would stand outside the door and when George Yohe opened the doors there was a mad dash to lay claim to the perfect location. Boxes were thrown in the doors with the hopes they'd land on a table and children were sent scurring under the legs of members with instructions to find a "good" location.

York has come along way since those early days. Having expanded the number of halls, the meet now uses all the buildings on the fairgrounds. With three dealer halls, 4 member halls and 1-2 operating layout halls, the meet draws 13,000-14,000 members, families and guests for each meet in April and October. York is a one of a kind meet. As the York Meet grew in popularity among the members of the Train Collectors Association they began coming from all over the world to find that rare and unusual item to add to their collection. After filling the Memorial Hall, also know as the Blue Hall, the meet grew filling every building on the fairgrounds. There was the Red Hall, White Hall, Purple Hall, Yellow Hall, Green Hall and Silver Hall. In 2004, the fairgrounds built their largest building measuring over 75,000 square feet and this became known as the Orange Hall. As a result the Yellow & Green Halls closed forever.

We invite non members to attend our meet and see what we're all about. We have a "one time" guest rule: you may attend one meet and then you are required to join TCA to continue attending. We think you'll like what you see and want to join the organization so you may continue to attend. The friendships you cultivate is just one of the benefits of attending our meet. Click here to learn about attending the show as a guest.